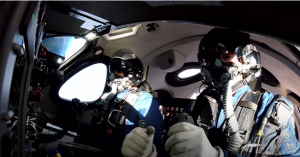 The sky has always attracted man’s attention and dreams. The first living being in space was not a human, but the Russian dog Laika, of the Kudriavka race. Several animals were used in the early days of space exploration to test the effect of radiation, weightlessness, and outer space conditions on living organisms.

Space tourism has always surrounded our minds and big companies like SpaceX, Boeing, Virgin Galatic, Blue Origin and SNC have projects to make this dream come true. Those, not astronauts, who can and want to pay for the space trip will have an unforgettable trip in their lifetime. With the advance of science, the time to pack your bags for this trip seems to have arrived. And the development of spacecraft that can carry out this type of tourism does not stop.

Last Sunday, billionaire Richard Branson made history by flying to the edge of space in a spaceship owned by his company, Virgin Galactic. After the success of his flight, Branson announced that he will give away two tickets for the flights that will be taken in the next year.

The draw to win these tickets is open and runs until September 1st. And the winners will be announced on September 29th. Although registration is free, it is also possible to donate an amount to the Space for Humanity institution. It is the institution that wants to make spaceflight more accessible. According to the initiative’s website, this donation should also increase the person’s chances of being drawn.

The entire process to participate is done in English through the Omaze platform website .

People who win this lottery will have to undergo prior training to “ensure that each astronaut is physically and mentally prepared to enjoy every second of the aircraft.” In addition to tickets to space, the lucky winners also receive accommodation included in the pre-flight period and the chance to visit Spaceport America, which is Virgin Galactic’s air base in New Mexico.

Unlike commonly seen rockets that have a vertical launch, Virgin Galactic launches them into the air. The vehicle called VSS Unity is attached to an airplane that climbs to an altitude of 15 kilometers. When it reaches this point, the vehicle is released and in sequence its engine is started, taking it to space .

When the rocket reaches a certain height its engine is turned off. This is when passengers experience zero gravity for approximately five minutes. In addition, they can also see the Earth’s curvature through the windows the ship has.

After that time, the aircraft returns to Earth and lands at Virgin Galactic air base.

People who don’t win the lottery but still want to go to space on this trip will have to shell out a salty sum. The seat on this flight will cost 250 thousand dollars, which is about 1.3 million reais.